The Greater Rochester Area Branch (GRAB) activity began in 1897, when Miss Olive Davis, who graduated the same year in the first women’s graduating class from the University of Rochester (UR), gathered together a large group of the women’s graduating class to form a club. At that time, women were not yet allowed to vote and had few opportunities to pursue a college degree. Through dedication and perseverance, Miss Olive Davis and eleven of the 1897 UR women graduates founded the Rochester Branch of the Association of Collegiate Alumnae (1902), more popularly known locally as the College Women’s Club. 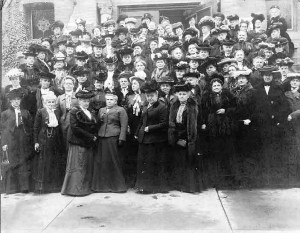 The Rochester branch supported the women’s suffrage movement and saw ten members actually serve overseas during World War I. A placement bureau to aid graduates in finding jobs in fields other than teaching was organized. Members endorsed a bill in the 1920s to amend state education law to provide a School of Home Economics at Cornell University. An investigation of U.S. history texts in four area counties was aided by the branch and it conducted a study of library services for New York State. In the 1930s, the branch endorsed the Federal Child Labor Amendment to ease the suffering of children under the age of 18 working in factories and businesses (Congress passed the amendment in 1924, but it was never ratified by enough states to become the law of the land).

The branch supported aid to nursery schools from the Depression-era Works Progress Administration and also worked for state aid to kindergartens. The Rochester branch pioneered supporting legislation for Social Security benefits for household employees and equal pay for equal work.

1897-1910
We, the branch, organized a placement bureau to find positions for women college graduates in fields other than teaching.

1911-1920
The members of the branch joined the National Association of College Alumnae and support the Women’s Suffrage Movement. Ten members serve overseas during World War I.

1920′s
We endorsed a bill to amend the New York Education Law to provide a School of Home Economics at Cornell University. The organization becomes an official branch of the AAUW. The Rochester branch helps in the investigation of U.S. History texts in four area counties.

1940′s
We pioneered supporting legislation for Social Security benefits for household employees, support of equal pay for equal work, and we conducted a study of library services for New York State. In 1946, we began a nursery school at the Brick Presbyterian Church, and Mrs. Erickson Perkins gave us her home at 494 East Avenue. In 1949, the nursery school sponsored a radio program for pre-schoolers. We began a Young Artist Series, recognizing youthful vocal and instrumental performers. We supported the Equal Status Jury Bill.

1950′s
We endorsed Educational TV. In 1954, the AAUW Career Information Service was made available to girls in the community. We established the Rochester branch Education Loan Fund. Money was raised to remodel the garage to accommodate an on-site nursery school.

1960′s
We established Friday Table Talks to keep members and the public informed aof current state and national legislation. We published a book listing sources of scholarship aid for women and distributed it to local high schools.

1970′s
The Rochester branch, in conjunction with the National Organization of Women, sponsored a 2-Day seminar on the Status of Women. The branch sponsored forums to introduce the community to nominees to the Rochester City School Board.

1980′s
Members established the Legal Advocacy Fund to aid women seeking judicial redress for sexual discrimination in higher education. By this time, the AAUW had awarded more than 5,000 fellowships world-wide.

1990′s
A local program, unique to the Rochester branch, Women Helping Girls with Choices, was created. It received widespread recognition for making meaningful contributions to girls in Rochester schools. The branch hosted a conference entitled “Empowering Middle School Girls,” which was attended by educators well beyond the local area.

2000′s
We hosted seven delegations of Russian women. We became Rochester Philharmonic Orchestra’s Decorator Showcase House. Women Helping Girls established a mentoring component and an alumnae group. COPE (Coalition on Pay Equity) was formed, along with other community organizations supporting pay equity. COPE hosts Pay Equity and Wage Gap press conferences and events around Equal Pay Day. We lobbied for historical women and suffragettes to be put on the US currency and gained acceptance by the US Treasury Department for 7 women to be placed on US currency. We established a women and girls STEM initiative to address local and regional challenges and opportunities in the STEM arena. We held Art Forums, featuring works by local and branch member artists. We hosted an annual International Women’s Day event, commemorating women throughout the world. President, Marilyn Tedeschi, was featured on the cover of AAUW’s national magazine, Outlook (Fall 2011).

2017 marks the 100th anniversary of women’s suffrage in New York State when women won the right to vote in the State of New York, and is three years before the federal government passed the women’s right to vote, known as the 19th Amendment (1920). GRAB will be collaborating with other organizations to focus on the history of women’s suffrage. GRAB will be hosting a series of events in honor of the women’s movement and will offer an exhibit of local women’s history and suffrage.